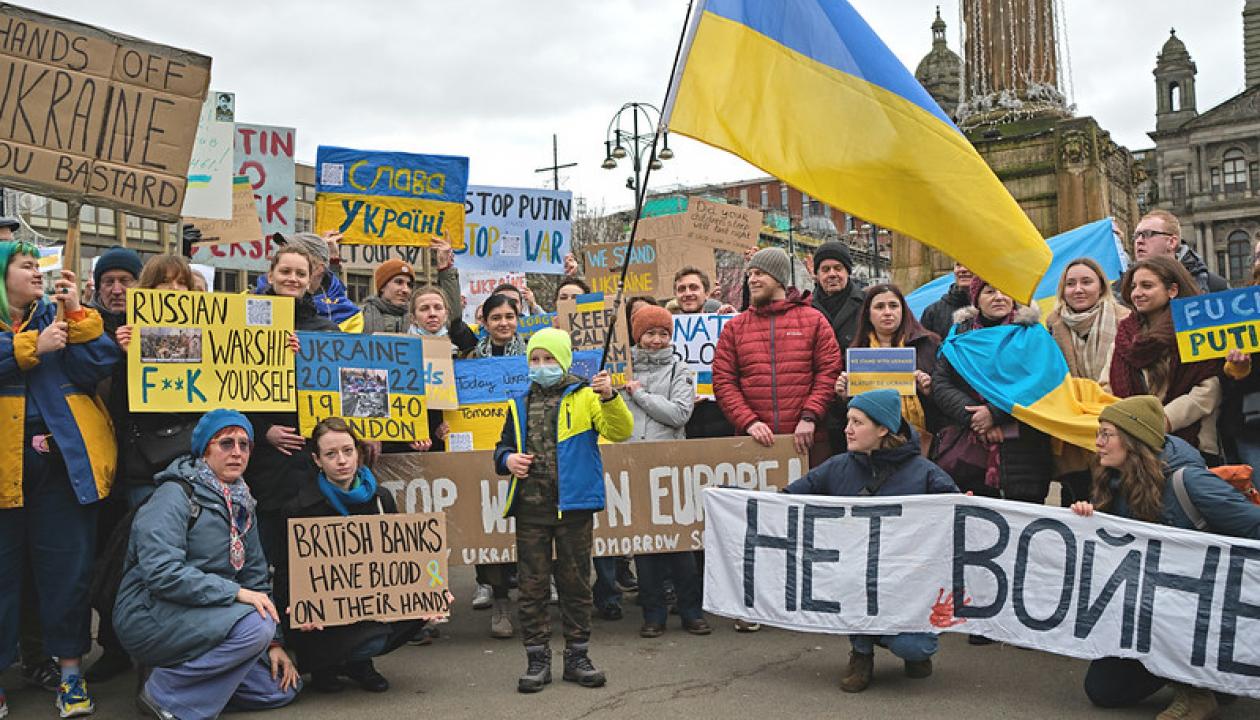 Back in the year 2000 in a BBC interview, Putin was quoted saying ‘Russia is a part of European culture. Therefore, it is with difficulty that I imagine NATO as an enemy.’ When asked about the possibility of joining Nato, he even went as far to say ‘Why not?’ as long as ‘Russia’s views are taken into account as those of an equal partner.’

Later in 2001, just a few weeks after the 9/11 attacks, during a speech to the German Bundestag, Putin announced unprecedented co-operation between Russia and the U.S., and again shared his vision of Russia’s European future.

Relations however had soured by the 2008 Nato Summit in Bucharest, where Eastern expansion into Ukraine and Georgia was hot on the agenda. Fears regarding the increased polarisation and militarisation of the giant defence alliance were being felt by Russia.

The Western mainstream media has pitted Russia as the enemy, Russian media has become even more heavily censored, and all sides have committed to a confrontational approach - jumping directly to military solutions. Civilians, as always, are set to lose as we witness yet again the destruction by giant war machines, and the humanitarian crisis that inevitably follows.

It goes without saying that Russia and NATO have suffered a strained relationship for decades. With posturing now coming from both sides, it was almost inevitable that once again Ukraine would become entangled in the crosshairs.

Better World Info provides a unique peace perspective on the current developments. At over 6,000 links, and growing daily, they feature the conflict from a Western/Nato perspective, Russian perspective, and independent viewpoints. There is also an inspiring section devoted to voices for peace and reason, alternative solutions, peace negotiations, and in-depth geopolitical analysis. They handpick information from only the most reliable and trustworthy sources, ensuring that the full picture is provided on a complex situation engrained in more than a century of history.

This resource on the Ukraine Conflict is the only place you can find a complete guide to historic and current events in the region, including background analysis of Nato, Russia, and Ukraine. Special highlights include the recent Russian Invasion which features important information on Russian sanctions, the resulting refugee crisis, nuclear threats, global protests, war crimes, repression in Russia, Russian oil and gas, the global economic fallout, Nato war budget increase, and how to help. You will find extensive information on armament from the West into Ukraine, which countries are supporting their war effort, and which ones are looking to profit from it. There is also a comprehensive toolbox covering the build-up to current events with a special focus on the Donbas region.

A comprehensive guide to the related Russia – U.S. Cold War escalation provides further insight into the evolution of current events, and U.S. involvement. You will also find access to top experts, politicians, and insiders via their social media category, as well as the campaigns demanding military de-escalation and their planned demonstrations.

To help stop the spread of misinformation, propaganda, and censorship, they recommend independent news sources where you can find the latest in unbiased, investigative media.

Finally, for those who want to add an extra layer to their understanding, they recommend further reading into conscientious objectors, the Ukraine Civil War and Crimea crisis of 2014, the influence of the oligarchs, and Ukrainian fascists and nationalists.

Better World Info aims to inform citizens and amplify peace voices during this conflict. With their incredible resource they fight the spread of disinformation, ignorance and propaganda. It is an excellent tool for peace campaigns such as Fridays for Future and their #StandWithUkraine protests.

Unions, mindful politicians, citizens, and voters can all use this educational tool to inform themselves and spread the demand for de-escalation and diplomacy. Unfortunately, peace work remains massively underfunded, whilst military budgets bloat and line the pockets of multi-millionaire war profiteers.

This central information platform is an essential tool for peace activists, and as a knowledge hub for global issues in general. It is also available in German at Bessere Welt Info. For a German language version of the Ukraine Conflict resource, you can check out the equally informative categories Russische Invasion and Ukraine.

Better World Info invites you to be part of a peace first approach, where open dialogue is given a chance, where enemies are not created to justify the build-up and use of weapons, and where armament companies do not profit from conflicts and the destruction of lives.

Unique resource on the Russia – Ukraine Conflict 2022 by Rachael Mellor is licensed under CC BY-NC-ND 4.0

Image: “Solidarity with Ukraine” by John A Watson is licensed under CC BY-NC-ND 2.0

Privacy
details
Imprint | Privacy
Your selection from
The controller (Dr. Norbert Stute, Austria) would like to use the following services in order to process your personal data. This is not necessary for the use of the website, but allows us to interact with you more closely. Please select, if appropriate, the following options:
Other content (1 Service)
Integration of additional information
Twitter
Twitter Inc., USA
ⓘ all details
ⓘ all details

Purpose: Provision of Twitter services
processing operations: Collection of connection data, of data of your web browser and data of accessed content; placing of advertising cookies by Twitter; processing of collected data by Twitter
Storage period: until you leave the website
Joint controller: Twitter LLC, Amphitheatre Parkway, Mountain View, CA 94043, USA
Legal basis of processing: voluntary, revocable consent at any time
Consequences of not consenting: The Twitter service will not be made available.
Legal basis of data transfer to the US: Data will be transmitted to the United States on the basis of your consent according to Art. 49 (1) (a) in conjunction with Art. 6 (1) (a) GDPR. The United States have not adopted data protection standards in conformity with EU requirements. In particular US intelligence agencies will be able to access your data without informing you hand without you and without you being able to take legal action. For this reason, the European Court of Justice has issued a judgment by which it invalidated the previous adequacy decision.